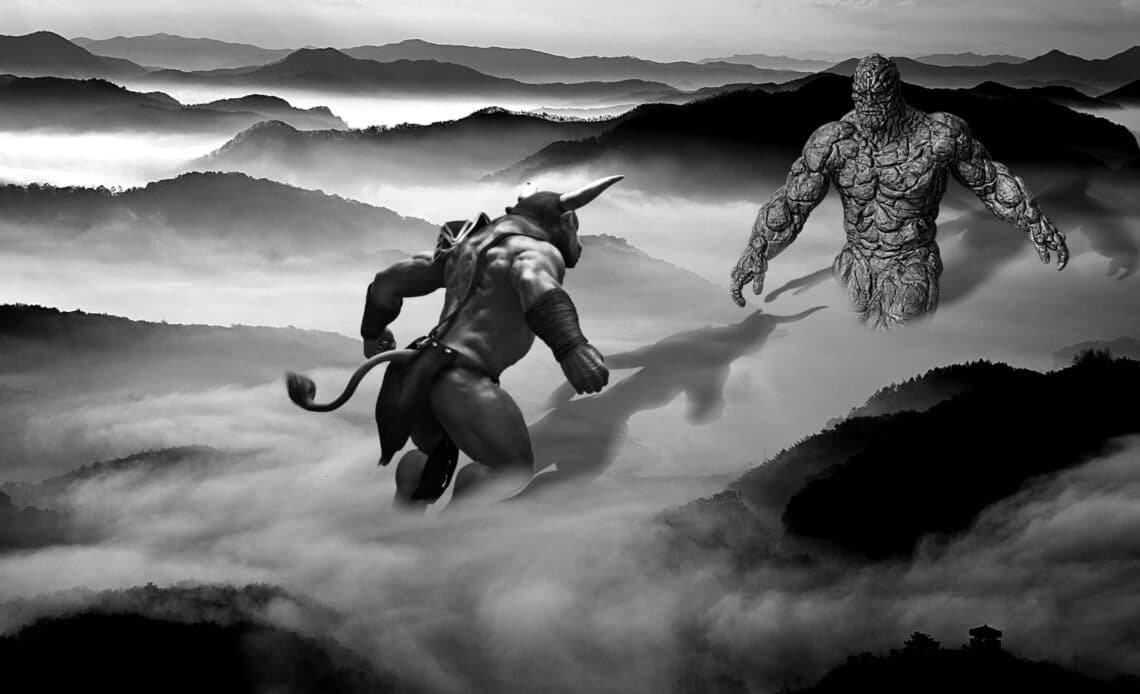 The Huge Titan is another word for colossal titan in Attack on Titan Anime. These titans are exceptionally large in size and the titan that we will focus on in this article i.e., Reiss titan also belongs to this category with a ginormous height of about 120-meters.

We will learn about the secret of the height of this Huge Titan and about its unique abilities in detail.

In terms of pure power, the Reiss Titan is considered to be even more powerful than the colossal titan that we see in action in the very first episode of the series.

How did the Rod Reiss Titan Get the Huge Titan Form and Why Didn’t Marleyans ake More of These?

There are several theories that are going around as to how this titan got so big. The first one is it might be the serum that was made for Historia that Reiss consumed. Instead of taking the serum through injection, he consumed it the wrong way. He took it directly off of the floor and started licking it and it went directly into its system.

Taking the serum that way might have caused a reaction that made him the Huge Titan. Reiss also has a blood linkage to the Reiss Royal family and this might also be the reason for its different features and exceptional height.

This Huge Titan, as mentioned by Armin and Erwin was ignoring whatever was happening around him and he kept moving towards Orvud District. This behavior is also considered to be the side-effect of injecting the serum in the wrong amount or the wrong way.

The Huge Titan titans that are formed this way exhibit different behavior than normal titans. Their movements are unpredictable, they sometimes even seem to ignore humans who are their favorite meal, and they are often stronger than a normal titan.

Injecting the serum wrongly is most likely the reason for this abnormal height and behavior of the Huge Titan. At some points, it also seems like the abnormal titans like that of Reiss have a specific goal in mind.

Huge Titan Reiss had a clear goal of taking back the role of the Founding Titan, and the founding titan is considered an intimating title and he had to live up to that. This turned him into a titan which was twice as big as your regular colossal titan.

It is pretty obvious that the strongest Titans are the ones that have the conscious control over their transformation i.e., the titan shifters. The serum was supposed to turn Historia into such a Huge Titan.

The pure titans are usually without any consciousness and that means they cannot fulfill a specific mission. Reiss thought a 60-meter titan is not something he can use for his purpose and so he turned into this Huge Titan.

The thing that concerns most people here is if the 120-meter titans are really that huge and strong then why didn’t Marley create more of these?

This is because a huge number of such titans cannot operate in a systematic and organized manner. They will only be making the rumbling and that will lead to more trouble. These titans being this huge have the ability to wipe out the entire human race and that is probably the reason they didn’t make more of these.

What Caused Rod Reiss to Turn into The Huge Titan Instead of a Normal One?

Some theories point towards Reiss consuming the serum the wrong way. But there are some people who also seem to question the contents of the serum that he consumed.

The serum was mentioned to be the most potent one ever created. The purpose of it was to make a colossal titan since it is the most destructive one and it can even think like a human being.

Another thing that might have influenced his transformation is the power of his will and his goal. The series is all about accomplishing things that demand all that you have and Reiss is the kind of person that is willing to do everything in his power to get what he wants.

So, it will not be wrong to assume that he turned this big because he has a pretty huge goal and enormous willpower to achieve it.

Rod belongs to the royal by bloodline. The royal family has a strong influence over the people of Ymir and it is shown clearly when Frida Reiss erased Historia’s memories even though she wasn’t even the founding titan yet.

Founding titan has the power to control the size of other titans. So, we think that even the royals who are not the founding titans, still have some of their abilities due to their being blood-related and close to Ymir and other elders.

Thus, we believe Reiss might have brainwashed Ymir to make him this Huge Titan with enormous power.

Can Levi Ackerman Change into a Huge Titan?

The Eldian Emperors conducted experiments on their subjects to create powerful soldiers called the Ackermans. The main goal was to prepare a race of highly skilled soldiers that protected their king without failing.

They have various traits, for example, experiencing the power of Titans without becoming one, sharp eyes, quick body movements, and fighting skills that are matched by none of the other types of soldiers.

This makes them capable of turning into extremely strong titans and that makes us assume that Levi Ackerman can turn into a titan with serum.

The AOT manga has explained a lot about the origin and body make-up of normal and Huge Titan. For example, in chapter 57 there is a conversation between Hange and Zeke. This little chat tells us that the main component of a titan’s body is concrete or chalk.

Titans have the ability to self-repair their bodies which allows them to keep moving even without some of their limbs. This is one of the reasons why they consume humans since they want to get all the nutrients they can for their regeneration.

In one Erin’s flashbacks, the Rod Reiss’ Huge Titan form seems to represent his mother who was eaten by a female titan when the wall Maria was breached. This enormous titan thus caused so many people to think about its origin and true purpose with more curiosity.

In one chapter of the manga, we see Ymir girl constructing the body of Zeke using sand which can also mean that the girl has the power to create and heal titan bodies. Zeke is also shown to have a memory of this due to him being a bloodline royal. Another thing that seems interesting is how the Ackerman is not able to heal as other titan shifters including Mikasa.

Based on all of that it is possible that the first serum is injected into the Eldian body which contacts Ymir. This is where the body of the titan is built. For titan shifters, the process is a bit different.

The reason for that is they are direct descendants of the founding titan and they have the innate abilities of the titan even when they are not in the titan form.

The Rod Reiss Huge Titan is something, likes of which we have never seen on the show before and there are still so many things that we do not know about. His size is literally gigantic and only appears to be limited whenever he has to attack someone on top of a 50-meter wall.

Different characters have tried to explain the actual size of the titan in their own ways. Eren for example has mentioned at one point that the Huge Titan is as big as the wall itself. While Simone and Historia have stated that the Rod Reiss Titan is as big as a “100 stories” building.

The most likely estimate of the height of the Huge Titan based on its appearance is about 110 meter which is still pretty insane. This is consistent with what Hange says about the creature.

According to her, Huge Titan is an abnormal titan who doesn’t show any signs of shrinking beyond the 50-meter mark.

People who are injected with normal titan serum have average heights and their abilities are also limited. However, the case of Huge Titan Rod Reiss is different in many ways. He has a royal lineage, he had a very specific goal in mind, and he concussed the most powerful serum which was prepared for Historia.

His willpower and a very big goal of becoming the founding titan is what led to him being the Huge Titan.

We hope this article has answered your every concern about the Rod Reiss Titan and we urge you to stay with us for more exciting stuff.