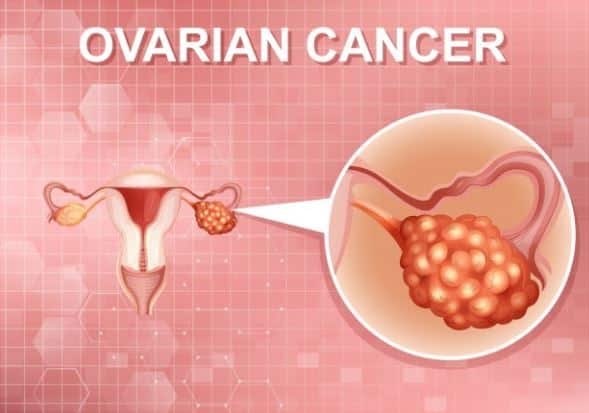 Apart from breast cancer, Ovarian cancer symptoms is probably the most widely known cancer known to affect women. This is especially due to the fact that ovarian cancer is extremely hard to detect especially in its early stages. And like breast cancer, one of the most important steps in fighting this devastating form of cancer is raising awareness.

Ovarian cancer is a malignant tumor that develops from ovarian tissue. Deaths from this disease exceed those from uterine and cervical cancers combined. The incidence increases with age – peak after 70 years. Ovarian cancer occurs against the background of borderline or benign neoplasms. Metastatic ovarian cancer is a metastasis of a tumor that is located in another organ: the thyroid gland, gastrointestinal tract, uterus, mammary gland. Ascites develop in 60-70% of cases. The tumor grows very quickly. Studies show that ovarian cancer is more common in developed countries. Among women with impaired ovarian function (the use of drugs to stimulate ovulation, frequent abortions, infertility), the prevalence of the disease is higher.

Risk factors of Ovarian Cancer every woman should know

Here are risk factors that every woman must know about this rare yet deadly form of cancer.

Contrary to popular belief, ovarian cancer is not the silent killer it was previously considered. In mostly patients, the symptoms of ovarian cancer remain asymptomatic. Ovarian cancer symptoms in many patients manifest only in the third stage. Sometimes young women experience abdominal pain – symptoms of an “acute abdomen”. This is due to capsule perforation or twisting of the tumor stem.

In many patients, ovarian cancer manifests symptoms in a common process: weight loss, malaise, general weakness, intoxication, fever, decreased appetite. Also can be observed: heaviness in the lower abdomen, nausea, vomiting, diarrhea, alternating with constipation. Due to ascites (accumulation of fluid in the abdominal cavity), the abdomen enlarges.

Ascites can develop over several months (accompanied by flatulence, abdominal pain, a feeling of bursting heaviness), or it can suddenly occur. A large volume of ascites causes shortness of breath when walking, difficulty in bending the trunk. There are signs of respiratory and cardiovascular failure, edema of the lower extremities. The main challenge with these symptoms is that they are often mistaken as signs of other disorders. These include:

It is especially important to have regular pelvic exams if you have a family history of ovarian cancer. The best chance of a good prognosis is detecting the cancer as early as possible. The cancer hospital and doctor treating the cancer also plays a significant role in the prognosis. Hospitals like the CK Birla Hospital – Gurgaon, Medanta, and Fortis are some of the best cancer hospital in Gurgaon. Their multispeciality team come with rich experience of treating a wide range of gynaecological cancers such as ovarian and cervical cancer. Go for regular health checkups and gynaecological visits to ensure that you are at the best of health.